In Afghanistan, the Taliban are marching towards Kabul with a measure of inevitability. In India, the government and policy wonks are wringing their hands with a degree of frantic desperation.

Quite expectedly, the Taliban are unmindful of the anxiety in New Delhi’s corridors of power. But curiously, except for the United States, the rest of the world is equally indifferent to Indian concerns. The reason for that is simple. After all these years, including the bitter lesson of the 1990s, our interests in Afghanistan remain in the realm of fantasy. For all the claims of historic ties, we do not understand Afghan society, much less its politics. Our Afghan-view seems frozen in the images of laughing women in Western clothes stepping out after watching a movie in Kabul. Somehow, we continue to mistake a minuscule urban elite for the majority.

Shorn of strategic hyperbole, our interests come down to two acknowledged and one unacknowledged factor. Of the former, the first is our traditional ties with the people of Afghanistan and the road it opened for us to Central Asia. It is because of this that India enjoys enormous goodwill among the Afghan people. Curiously, despite this centuries-old relationship, this goodwill didn’t include a large number of Pashtun people who eventually became first the Mujahids to fight the Russians, and subsequently the Taliban who upended the Mujahids.

The second reason is our fear that with the Taliban in control of Afghanistan, hardened terrorists will spill over into Kashmir. Worse, Islamic extremism will be exported into mainland India; just as happened with al-Qaeda and Islamic State. It seems that unbeknownst to most, Indian Muslims were flocking to join the ranks of both to bring about an Islamic revolution in India.

The unacknowledged Indian worry is that the space that non-Taliban Afghanistan gave us to carry out ‘special operations’ will no longer be available.

As mentioned earlier, our interests in Afghanistan are fantastical and removed from reality. Afghanistan was the next-door neighbour of undivided India, with multiple road connections – from Khyber Pass in the west to Chaman in the south and a few in between. After Partition, India’s physical connection with Afghanistan was through Pakistan. The accessibility of this connection depended upon India-Pakistan ties.

Given that India has not been able to manage its relations with other, more immediate neighbours, including Nepal, it is quite ambitious to imagine that it could have managed ties with Afghanistan with which it does not even have a physical connection; and no religious affinity. The relations with Afghanistan are good because that’s how we imagine them to be; it has nothing much to do with the truth on the ground. Afghan traders coming to India to sell dry fruits and Rabindranath Tagore writing Kabuliwallah is no benchmark for the bilateral relations. If individual traders could define relations, Kashmir wouldn’t have erupted into a roiling insurgency. After all, Kashmiri traders have been coming to all parts of the country selling their wares for generations.

A test of ties could have been the number of people one gave refuge to. In 2019, United Nations Humanitarian Commission for Refugees registered 40,000 Afghans in India. In 2020, it registered over 1.4 million refugees in Pakistan, down from nearly four million a few years ago; the rest were repatriated to Afghanistan or rehabilitated to other countries. Iran, meanwhile, hosts close to two million Afghan refugees even today. It can be said that it is not our fault if hapless Afghan people seek refuge in countries other than India. But then hasn’t India’s Citizenship (Amendment) Act clearly spelt out which types of Afghan people are welcome in India? What are we fretting about then? 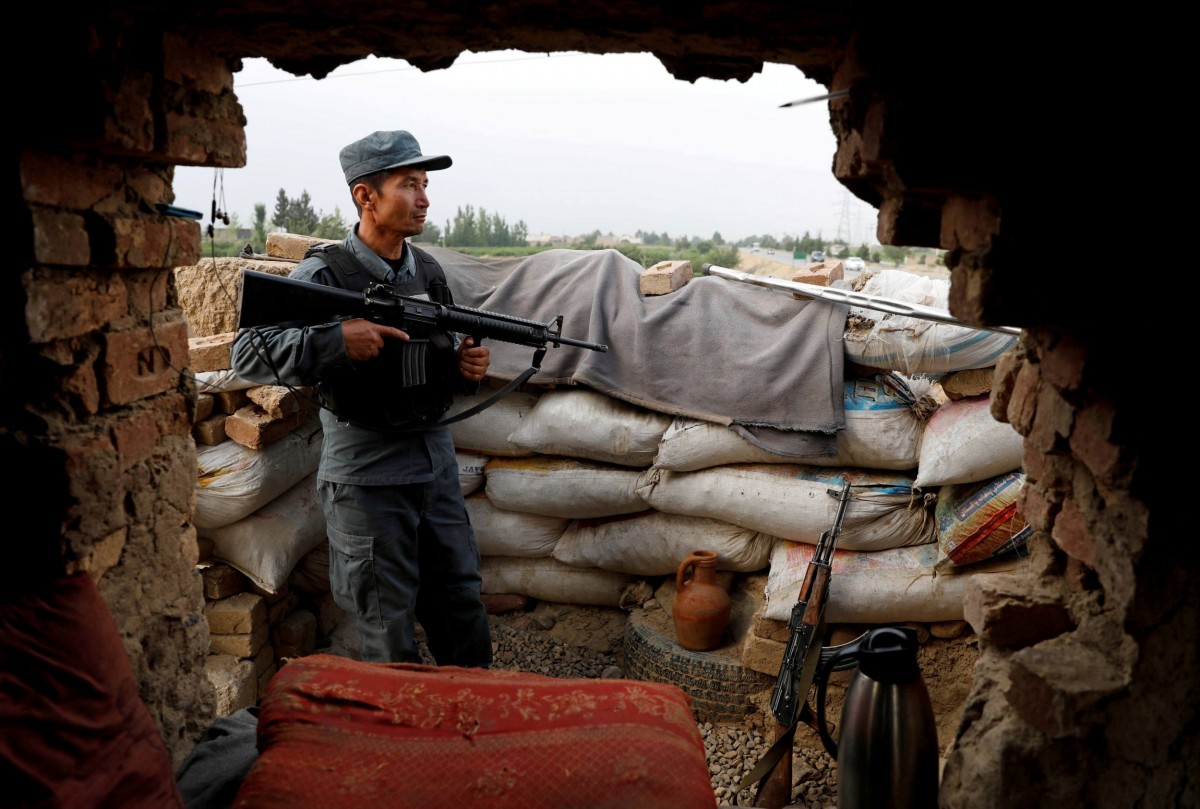 An Afghan policeman keeps watch at the check post on the outskirts of Kabul, Afghanistan July 13, 2021. Photo: Reuters/Mohammad Ismail//File Photo

For all the claimed goodwill, India’s hand-wringing is not on account of the people or the Afghan women who will be pushed back into medieval times by the Taliban. As an aside, government of India’s concern for the freedom of Afghan women is a bit rich, given that it has been progressively infantilising Indian women, taking away their agency over their lives – telling them what to eat, what to wear and who to marry. For all our progress, honour killing remains a grim reality. Coming back to Afghanistan, the Indian frustration stems from two sources.

One, the who’s who of the world has been engaged in the Afghan reconciliation process in some way or the other. The Afghan issue has spawned an exclusive club of nations that can exercise influence over other countries. While Pakistan has emerged as the most valuable member of this club, sought by everyone including New Delhi’s most trusted friend Russia, India has been left outside the tent. The fact that India is unable to influence events in its own neighbourhood is a huge comedown. Hence, the frustration.

Two, Afghanistan is still the object of wet dreams of the proponents of ‘Akhand Bharat’ or greater India, because once upon a time Emperor Ashok had captured it; and later, some regions of Afghanistan have been the part of various Indian empires (of course, the notorious invaders starting with Ghazni also came from Afghanistan). Those who fantasise about this are not a minuscule number. Strobe Talbott recalls in his book Engaging India how during one of his meetings with deputy prime minister L.K. Advani, the latter mused about ‘Akhand Bharat’ to Talbott’s horror.

Frankly, expecting a role in Afghanistan was a remarkable overreach on India’s part. There is nothing unique that India brings to the table that others (say, China or even Russia) can’t do better, whether it is infrastructure or economy-building. Or supply of goods, including armament. Moreover, India has a reputation of not having staying power. Remember the Chabahar port in Iran, which at one point was to rival Gwadar? Or the ambitious India-Myanmar-Thailand trilateral highway, which even 20 years later is still crawling?

The myth of ‘exported’ terrorism

Coming to India’s acknowledged concern number two – the export of Taliban-inspired terrorism into India. This concern is even more untenable than the first one and once again has no basis. The Taliban, just like the Mujahids before them, are sons of the soil with interest only in Afghanistan. Once they have control over most of the country, including Kabul, their priority will be to consolidate their power. Moreover, the Taliban of 2021 are not the same as their 1990’s predecessors.

Clearly, they have learnt their lessons. The fact that they seek international legitimacy is evident by their commitment to talks. They have been diligent in participating in the successive Doha Dialogues, including with the US and the Afghan government representatives. Even as the fighting is raging in Afghanistan, Taliban representatives met up with former chief executive and member of the Ashraf Ghani government Abdullah Abdullah on July 17, 2021 in Doha, overseen by a benign France.

Also read: Reckless US Withdrawal Could Make Afghanistan the Powder Keg of the World Again

What’s more, in the last few weeks, the Taliban delegations led by Mullah Abdul Ghani Baradar, who is turning into something of a peripatetic diplomat, have visited Iran, Russia and most famously China, where they met up with the foreign minister Wang Yi. Even more significantly, Baradar has been assuring his interlocutors that Afghanistan under the Taliban will not give sanctuary to any form of extremists, ranging from the al-Qaeda to the Islamic State.

To China, Baradar specifically mentioned that though the Taliban supported Uighur rebels in the past, they won’t do so any longer as they view China as a friend. Clearly, the Taliban understand the importance of the Wakhan corridor and what it could do to the economy of Afghanistan. According to some reports, China is already building an all-weather road through the corridor linking its Xinjiang province with north Afghanistan and Tajikistan. It is no secret that north Afghanistan is rich in mineral reserves, and China wants the first mover advantage here.

This new pragmatic version of the Taliban is unlikely to do anything that may lead to global isolation once again, especially now when they are engaging with the world. Hence, to assume that once in power, they will promptly resume export of Islamic extremism is refusing to recognise what is happening right in front of us. If violence in Kashmir goes up after the regime change in Kabul, it will not be because the hardened Islamic terrorists, having achieved their goals in Afghanistan, would move on to the next battlefield. Violence in Kashmir may go up because the government of India has done nothing to address the cause of that violence. The biggest lie that the governments across the world peddle is that violence can exist without an underlying cause. To avoid addressing that problem, which in most cases is of their own making, governments attribute various reasons to it – from religious extremism to a malevolent nation fomenting trouble from outside. The biggest myth perpetrated by powerful nations in this century has been terrorism. This has been used as an excuse to avoid resolving outstanding political issues for various reasons ranging from irredentism, political expediency or perceived strategic interests.

If the West had been mindful of Palestinian concerns when it accommodated Zionist ambitions (to obviate its own guilt) at the turn of the last century, there probably wouldn’t have been the violent outbreak in Palestine. If Russia had not invaded Afghanistan, the US-Saudi-Pakistan troika wouldn’t have created the Mujahids, and perhaps, there would have been no Taliban. If the US had not invaded Iraq to get even with Saddam Hussein, the defeated Ba’athist wouldn’t have converged as the Islamic State. If the government of India had addressed the Kashmiri demands for greater autonomy and representation, the aspiring legislators of 1987 wouldn’t have metamorphosed into armed rebels and insurgents in 1989.

Just consider for a moment, for all their exertions, resources and lives lost, why nations have not been able to eradicate terrorism. Because no terrorism exists; much less religious terrorism. Religion is frequently invoked to rouse people, to unite them in fighting for a common cause. But none of these exhortations would work if there was no underlying political-social grievance fuelled by repeated injustice. Religion is not the cause, only a motivator.

Everything that great powers denounce as terrorism are the violent manifestations of unresolved political problems. If these grievances are addressed politically and justly, the ground that sustains violence would disappear. This is the reason that Indian Muslims have remained indifferent to religious extremism, despite the allegations to the contrary. They have no grave political grounds to resort to violent extremism. Decades ago, a former member of the Student Islamic Movement of India told me that after the 2002 Gujarat carnage, mysterious recruiters visited the university campuses with purported photographs and videos of violence from Surat to radicalise the students. Only a handful responded to such provocations.

So, the fear that once in power, Taliban would foment trouble in Kashmir and other parts of India is as unfounded as the presumption that the majority of Afghan people want a liberal society. People with a sense of history may remember former President Najibullah’s struggle for acceptability in Afghanistan once the Russians withdrew. He even made Islam the state religion to win over majority support.

India’s role in Afghanistan would be to leave it alone. Meanwhile, focus on our own internal and external problems. At the cost of sounding like a stuck record, open talks with Pakistan. Resolve Kashmir honourably; and plug the fountainhead of terrorism. Establishing diplomatic relations with the new dispensation in Afghanistan won’t be difficult. Who says that foreign policy needs to be Machiavellian? A magnanimous policy that seeks mutual and honourable cooperation with other is not a sign of weakness. On the contrary, it’s a sign of a self-assured nation.

Ghazala Wahab is executive editor FORCE newsmagazine. Her latest book is Born a Muslim: Some Truths About Islam in India.