Srinagar: On August 5, 2019, Rahul Sharma, a resident of Kathua, was ecstatic. He and his friends distributed sweets to celebrate the scrapping of Articles 370 and 35A of the constitution that granted a special status to the erstwhile state of Jammu and Kashmir.

As most parts of the Jammu division erupted in celebration, Sharma, who then called himself a “hardcore” Modi supporter, said he felt it was the beginning of what Prime Minister Narendra Modi called “achhe din” for the people of J&K.

Fifteen months later, Sharma feels apologetic and disgusted. “We do not want ‘achhe din’. We want ‘buray din’, back,” he said. “It is for the first time that somebody wants to impose ‘achhe din’ on the people and the people are not willing to accept them,” he said, calling the new land laws and the post-August 5 amendments in J&K a human rights violation. “First, it was happening with Kashmiris, now it is happening with the people of Jammu as well.”

Sharma is not the only Modi or BJP supporter in the Jammu region who previously supported the scrapping of Article 370 and has changed their stance now. Tanya Bandral, an MSC in Chemistry who also tutors students in Jammu’s vicinity, said she was a steadfast supporter of the the BJP. “I celebrated the move,” she said, “but I now regret having done so.”

Bandral had been hopeful that the move would be beneficial for Jammu. “But 15 months down the line, I feel betrayed. We have been ruined. Our jobs are gone, our land is gone.”

Like Bandral and Sharma, many residents in Jammu feel cheated by the ruling party. Bandral said that the BJP exploited their “nationalistic feelings” and “patriotism”. With every new law that the Union government has implemented in Jammu and Kashmir, resentment among the people of the Jammu grew, she said.

“Now, I realise the revocation of Article 370 was wrong. Although there should have been some amendments to the law, the whole law should not have been scrapped,” Bandral said.

Sharma said that with every passing day, the consensus amongst people in Jammu is growing. “Our eyes have opened, we discuss and conclude that we want Article 370 back,” he said.

Like Sharma, Bandral said her outlook on the revocation of Article 370 has changed completely. “We want all those rights back that were guaranteed by Article 370. All my friends who supported the abrogation, regret their decision now,” she said.

The Bharatiya Janata Party, which had carried out an extensive ‘Mission 44+’ election campaign in Jammu and Kashmir for the 2014 assembly elections, had promised to scrap Article 370 in its election manifesto.

In 2014, Modi had addressed a mammoth election rally in Kathua, Sharma’s hometown. “It was a cold winter morning, December 12, 2014,” recalls Sharma.

Sharma, a law graduate at that time, was enthusiastic as he rushed to attend the rally at the sports stadium early in the morning at 8 am. Four hours later, PM Modi arrived at the rally. Sharma, who had never voted for BJP before, said, “That day, I made up my mind to vote for Modi. I turned into a hardcore Modi supporter,” he said. PM Modi’s speech, he said, was very motivating and progressive. “Modi spoke about black money, Lokpal, and poverty. But all that was a mirage.”

Satish Vidrohi, a social activist in Jammu, said that the resentment against the removal of Article 370 was increasing every day. Vidrohi believes that the initial celebration in Jammu was purely owing to the fact that the BJP had exploited the raw nationalistic sentiments and patriotism of the people of Jammu. “There is resentment, but there is also fear,” he said.

The general perception among the people that this correspondent spoke to in Jammu, was that the current administration is not going to permit protests against the scrapping of the erstwhile state’s constitutional status and that anyone who dared to step out onto the streets would be arrested.

Dheeraj, a law student at Jammu University, said that the administration was arresting those who displayed any opposition to the scrapping of Article 370. “Recently, a National Conference meeting was scheduled in Jammu and they arrested many activists of the party. Anybody who speaks about the restoration of Article 370 is arrested.”

He also alleged that there has been a witch-hunt against intellectuals. “That is why there is no resentment visible in Jammu,” Dheeraj said.

Vidrohi also believes that there is growing resentment among right-wing activists as well. However, he said that they do not show resentment due to political compulsions. “I have had a lot of closed-door discussions with my rightwing friends and they heartily express their feelings against the abrogation of the Article 370,” he said. Giving an example of his father, Vidrohi said that his father supported the removal of Article 370 throughout, but now he “feels ashamed”.

He said that murmurs of dissent against the scrapping of Article 370 were on the rise amongst the youth in Jammu as well. A plethora of organisations including SCST organisations, Jakarsiya, Ambedkar Yuva Sangathan, and Bhim army were planning a joint march against the new land laws and post-August 5 amendments to the laws.

Revoking Article 370 of the constitution was a key part of the BJP’s core agenda and has always struck an emotional chord with its rank and file after its ideologue Syama Prasad Mookerjee died in a Jammu and Kashmir jail in 1953 to protest the state’s special status and demand its complete integration with the Indian Union.

Spearheading the agitation to scrap Article 370, Mookerjee had entered the state and was arrested. His presence was deemed illegal as outsiders were then required a permit to enter it.

Mookerjee’s death, considered mysterious by the BJP and its Hindutva allies, and his slogan “ek desh mein do vidhan, do pradhan aur do nishan nahi chalenge” (One country can’t have two constitutions, two prime ministers, and two national emblems) became a rallying cry for the party.

Right from its Jana Sangh days, the saffron party blamed Article 370 for separatist activities, militancy, and alleged discrimination against Jammu and Ladakh regions in the state.

In Jammu, since the times of Shyama Prasad Mukherjee, Dheeraj said, the RSS was working and building a consensus among the people that Article 370 was “anti-people”. He said, “RSS succeeded in propaganda and distortion of historical facts due to which a lot of ‘pseudo nationalism’ emerged in Jammu.”

He said the people in Jammu started looking at things through commercial prejudices. “They supported abrogation of Article 370 thinking that they will teach Kashmiris a lesson while others did it due to raw nationalist feelings.”

Dheeraj said that Kashmiris were at least “fighting” to safeguard their rights while people in Jammu were stuck in raw nationalism.

Vikas Bhadoriya, an LLM student at Jammu University, said that the people of Jammu celebrated the removal thinking that it would create opportunities for them. “We thought it will give opportunities. People thought they will get more security vis-à-vis land and jobs but exactly the opposite has happened.”

He said that the people of Jammu want Article 370 back with “amendments”. “All the securities under Article 370 should be given back to us to save our identity,” he said and added that a movement was emerging in Jammu. “We are planning a J&K Swabiman Yatra (Self Respect Yatra) across J&K.”

Like many in Jammu, Bhadoriya said that there was an atmosphere of fear. “People fear that they will be arrested and lodged in jails.” 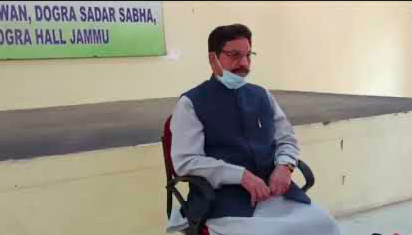 Gulchan Singh Charak, a former minister and president of the Dogra Sadar Sabha, said that the scrapping of Article 370 was welcomed by his party. However, he said, his party wanted a unique model to safeguard the interests of the people of Jammu, Kashmir, and Ladakh. “We asked them (Centre) for a good model and also suggested that they hold  discussions in three parts of the erstwhile state.”

Speaking about the new land laws, he said that it came as a surprise for people of Jammu. “It is a breach of trust as the prime minister and the home minister had given assurances about safeguarding the unique identity of all the three parts of the state.”

Charak was arrested almost a fortnight after Article 370 was scrapped when he was scheduled to address a press conference to put forth suggestions for safeguarding the interests of the people in Jammu.

Meanwhile, Rahul Sharma said that he regrets voting for Modi and celebrating the developments on August 5, 2019. “I apologise to myself and the people of Jammu and Kashmir,” he said, and expressed hope for a joint effort by the people of Jammu, Kashmir and Ladakh for the restoration of Article 370 and safeguards for all the rights of the people.