Hours after the March 24 announcement of the nationwide lockdown, the country looked on in horror as millions stranded in cities started their long walk home. In the following weeks, the country witnessed botched train journeys, mass starvation, and death. The crisis was underscored by a lack of State awareness, imagination and capacity, best described by a migrant worker who said, “Maybe when [they] decided to do this, nobody told [them] about us. Maybe [they] didn’t know about us.”

Six months down the road, the crisis is met with no accountability in parliament. Some have argued that the migrants being missing from the political calculus is directly attributable to the migrants’ inability to cast their vote and form a concrete electoral base whose interests must be seen to be served (here and here).

In this post, we argue that the lack of access to the vote by migrant workers constitutes a violation of their fundamental freedom to vote, read under Article 19(1)(a) of the Indian Constitution. Migrant workers, especially circular or short-term migrants, constituting tens of millions of citizens are some of the least represented groups in the ballot.

Circular migrant workers, distinguished from permanent migrants both of the formal and the informal sector, are a predominantly mobile class who alternate between their home states of residence and their host cities of work, throughout the year. A report of the National Commission for Enterprises in the Unorganized Sector in 2007, observed that SC/ST/OBCs who were often landless and lacking in formal education were overrepresented in the group of circular migrant workers (on pages 96, 128, 136). Seasonal patterns of harvest and general rural distress requires that they temporarily move to the city for work but many continue to maintain long term familial relationships with their home states.

For them, working at host cities are means to maximize savings so as to invest in their long-term futures back home (on page 30). This constantly mobile citizenry is at odds with the sedentary nature of citizenship-based entitlements that are available from the State, in this case the entitlement of the vote.

Every eligible voter is registered with a singular ID at a particular constituency in order to participate in elections to the Lok Sabha, the state legislative assemblies and the panchayat/municipal elections.

The issue of disenfranchisement, faced by circular migrant workers, is not one arising out of the systemic denial of the right to vote, but as a denial of their freedom to access the vote. The Supreme Court, in a series of cases, has conclusively interpreted the freedom to access the vote as within the ambit of Article 19(1)(a) and granted reliefs that enable the casting of the vote.

This fundamental right to access the vote is denied to circular migrant workers in two key ways – first, a voter may only be enrolled to vote in the constituency in which they are ‘ordinarily resident’; and second, they can only access their franchise through in-person voting at their registered constituency.

While these are rooted in considerations of electoral efficiency and preventing voter duplication, its underlying assumptions of a sedentary population end up excluding circular migrant workers in obvious ways.

A registered voter has the option to change their constituency after having ordinarily resided in the same. However, circular migrant workers, as temporary visitors, often may not qualify as ‘ordinarily resident’ in their host cities where they stay for uncertain periods of time [read here and here].

While there is no codified threshold for duration of stay, there is a practical difficulty of obtaining any proof of ordinary residence in their host cities, where they often live in makeshift temporary housing, open settlements and access entitlements like water and gas through a variety of uncertain sources.

Their reality is invisibilized in the requirement of documentary proof such as a passbook, rent agreement and utility bills, none of which may be accessible to the migrant worker. Circular migrant workers also hesitate to go through this complicated and often hostile process of registering or transferring their vote if they are only temporary visitors.

A potential solution to the problem would be to amend this process to reflect the needs of migrant workers. For instance, the Election Commission of India, has provided an exception from documentation for homeless people, and allowed for verification through block officers [read]. Similar solutions must be explored so that circular migrant workers are provided a voice in the governance of the cities they help build.

This would be an important step for those circular migrant workers that come to the same host city for work, year after year. It would also have the benefit of giving migrant workers a direct voice in cities where much of their precarity and marginalisation is experienced. 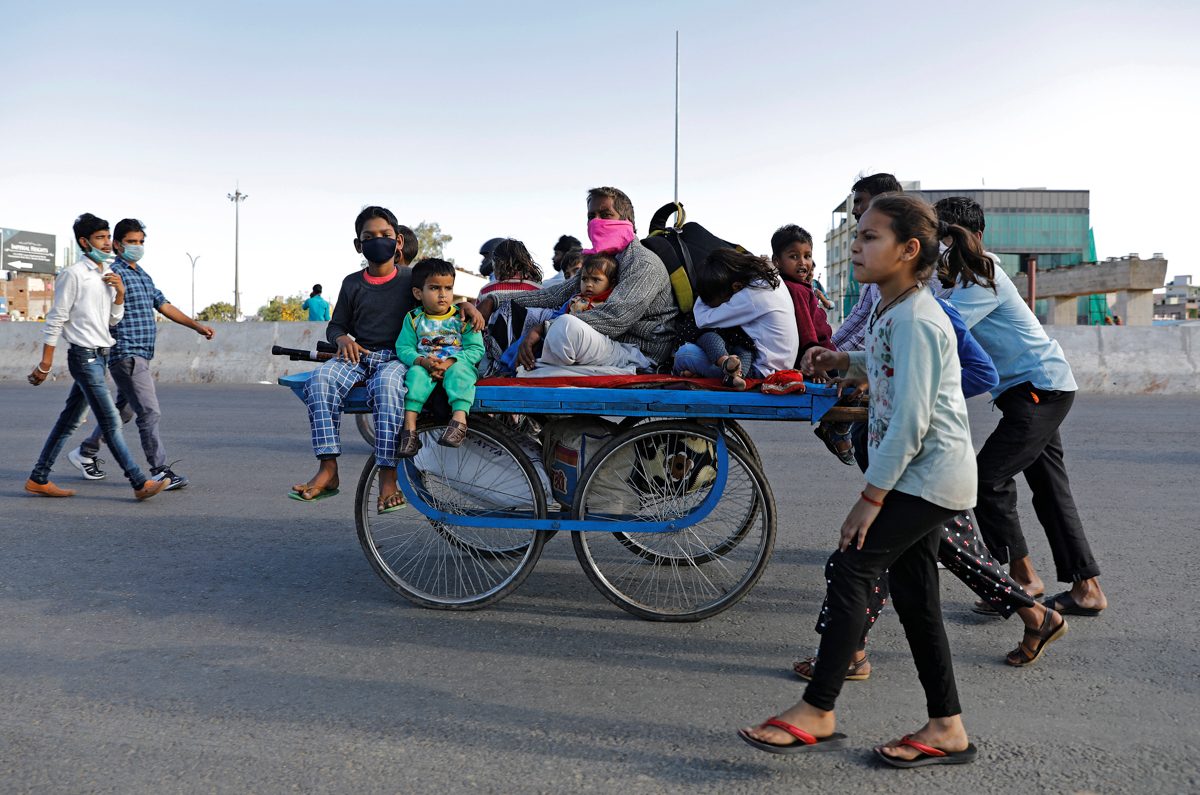 A migrant worker rides a cart with his family on a highway as they return to their villages during a 21-day nationwide lockdown to limit the spread of COVID-19 in Ghaziabad. Photo: Reuters/Adnan Abidi

The report also showed that circular migrant workers had many electoral concerns back in their home states, such as improper removal of names from electoral rolls and continued access to government schemes. In this context, the requirement to vote in-person means that circular migrant workers have to travel to their home states to cast their vote, at great personal cost in terms of their time and money, resulting in dismal voting turnouts.

We argue that access to the existing scheme of electronically-transmitted postal ballot (ETPB), will allow that subset of circular migrant workers who are enrolled as voters in their home states, and prefer to continue being so, to access the vote.

While it will not give migrant workers a direct voice in their city of work, it will introduce the circular migrant workers as a key political constituency in their home states, by enabling participation and representation at the home state and national elections. Political parties, at both the state and national level, will be consequently compelled to take on their cause, through inter-state or centre-state dialogue.

Section 60(c) of the Representation of People Act, 1951 empowers the Election Commission of India, in consultation with the government, to notify “classes” of voters who are unable to vote in-person at their constituencies owing to their physical or social circumstances. Once notified, the voters are eligible for the ETPB system, which is a one-way electronic transmission of ballots, where the ballot is both system-generated and protected by dual encryption in order to safeguard against voter fraud.

In addition, the postal ballot is subject to oversight by the returning officer and through more traditional ways of redressal. This mechanism operates separately from the regular process of in-person voting and doesn’t preclude the opportunity or incentive to permanently migrate and change one’s constituency after having ordinarily resided in the same. People wait in queues to cast their votes during the second phase of the Jharkand assembly elections, at Bundu, 45 km from Ranchi, on December 7, 2019. Photo: PTI

Over the years, there have been several notifications that have attempted to identify new classes of voters, thereby upholding the spirit of free and fair elections for all. Postal ballots have been extended to defence personnel, persons with disabilities and people over 80.

In the 2019 general elections, the ETPB system was accessed by 18 lakh defence personnel across the country. In 2019, in the backdrop of a PIL before the Supreme Court, a bill was floated to extend a similar remote voting possibility to over 3.1 crore NRIs in order to “boost their participation in nation-building”.

The challenge now before the Election Commission is to effectively identify circular migrant workers, in which they can be guided, but not limited, by the framework of the Inter-State Migrant Workmen Act, 1979.

Constitutional mechanisms must adapt to societal change, in order to remain relevant. At the time of independence, the universal vote represented a commitment to subversion of economic power structures through political access.

“Just as the capitalist must have the power, if he is to have any constitution, to dictate how he shall live on terms of associated life with the labor, surely the laborer is entitled also to have the power to regulate the terms on which he shall live with his capitalist master.” [Dr. B.R. Ambedkar, First Roundtable Conference, December 22, 1930, 559.]

In the globalised world we presently inhabit, it would be a constitutional infirmity, if a mobile working class is effectively denied their franchise due to their socio-economic location.

The prime minister recently responded to an established claim for portability of welfare entitlements, by working towards universalising the ration card. In a similar vein, it is incumbent upon the constitutional machinery to re-infuse meaning into the enduring commitment of “One person, one vote. One vote, one value”.

Radhika Goyal and Sharvari Kothawade are lawyers who graduated from NLSIU in 2019. They were part of a research initiative of Citizens for Justice and Peace in connection with their ongoing campaign for postal ballots for migrant workers.

A version of this article was previously published with the Indian Constitutional Law and Philosophy blog.