The pandemic has revealed all kinds of crisis across the world. Some directly triggered by COVID-19, and some not so.

The question of livelihood, of lost employment has been the most threatening. But the pandemic has also revealed another crisis simmering below the surface – of housing. The pandemic has drawn a far more profoundly etched line between those who own property and those who do not.

With working classes, it is far more intensified because the discourse around quelling the disease assumes that people have access to protected homes, supply of water and private toilets. But that is a far-fetched dream for most. But amidst all the COVID-19 talk, we have failed to look at this question of housing, looming large over us. Why?

India witnessed millions of workers taking to the roads to walk back to their homes, thousands of kilometres away. Some managed to get onto trains, who met with a different kind of horror. The middle class in India, could not fathom why the migrant workers  were leaving. What they missed was, the city was never a place they called their home.

They were expendable to the cities that they had built, which forced them to go trudging back to places they call homes. The fundamental right to freedom to move and find employment anywhere in the country has been in the public domain. But this was probably the first time the discourse of the right of the workers to go back home came to light.

But despite years of working in the city, why was the city not home to the millions of workers?

Circular migratory patterns show that the labourers treat the city as a temporary place of residence, a place where they earn money and leave. But their precarious housing conditions is the most important reason why workers can never belong in the cities.

Finding a somewhat permanent shelter is crucial to finding one’s foothold in unknown places and making them into homes. This has broader implications. We feel vulnerable in places that are not our homes. We do not think we have anything called rights in places that are not homes. For the working class, living on subsistence wages, with nothing to sell but their labour, precarity defines their existence in the city.

An important reason why workers were also forced to go back was because there was no way they could have paid rent. The inability to pay rent would have subjected them to violence and harassment. And in this, the migrant working class is not alone. Low-end BPO workers facing salary cuts and students find themselves in a situation where their ability to pay rent has been severely curtailed.

COVID-19 has, however, led to different conversations in the United States. In the face of massive job losses, renters across America have been vocalising the need to call off rent. Twitter hashtags #CantPayMay and #CancelRent have called for rent strikes across American cities.  In the United States of America, the conversation, however, is not new. Rent strikes have been a feature of American cities since the 1920s. Possibly, because of the older roots of housing with financial markets in America, housing inequalities have been a talking point in the US. 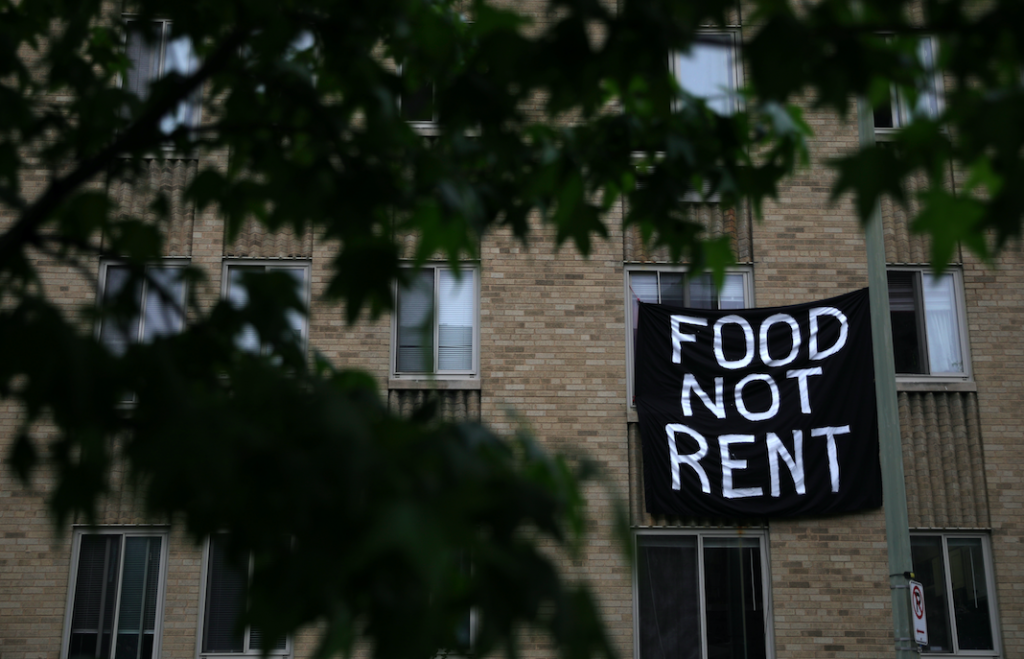 Makeshift sheets displaying messages of protest contesting the ability to pay for rent hang in the window of an apartment building in the Columbia Heights neighborhood in Washington, U.S., May 18, 2020. Photo: Reuters/Tom Brenner

But the other discourse that has propelled housing rights conversations in the United States is also race. The iconic Civil Rights Act, 1968, or better known as Fair Housing Act acknowledged the racial nature of neighbourhoods that is at the heart of inequality in America.

But recent scholarship like Richard Rothstein’s book, Color of Law and Keeanga-Yamahatta Taylor’s book, Race for Profit have gone on to show how government bodies like the Federal Housing Administration have been instrumental in perpetuating racial injustice.

Recent scholarship has brought attention to how housing ordinances have consistently used zoning to make it harder for African Americans to buy houses because black bodies bring down property value. As a result, racial justice has also led to conversations around housing justice. Housing justice, in US, has often been argued as a human right. As a result, Black Lives Matter and housing movements have begun to merge at many levels.

Therefore, the right to housing has been equated with regularising informal settlements alone. Housing rights, as a result, have always been framed very narrowly in India. Even left movements and Dalit movements which could have politically amplified the question of right to housing, failed to even acknowledge it as a problem.

The problem with only invoking rights with respect to demolition is also that it reduces the housing question to a state vs. people position. There is a dire need to acknowledge that housing rights is a  far wider and a far more complex issue. It includes banks, governments, real estate agencies, brokers and also landlords; and these actors, especially local ones, can vary significantly across the country.

Rents are governed by arbitrary rules, not laws. Steep and arbitrary rents have affected people’s quality of lives across classes and cities.

In cities like Bengaluru, it has become an accepted practice to charge ten months’ security deposit. Arbitrary evictions are fairly common across the country. Homeowners often band together in the form of Resident Welfare Associations across Indian cities which often become vehicles of arbitrary and discriminatory rules as to who can rent in a neighbourhood and who cannot. And more often than not, these lines are drawn on the lines of caste, religion and even marital status. 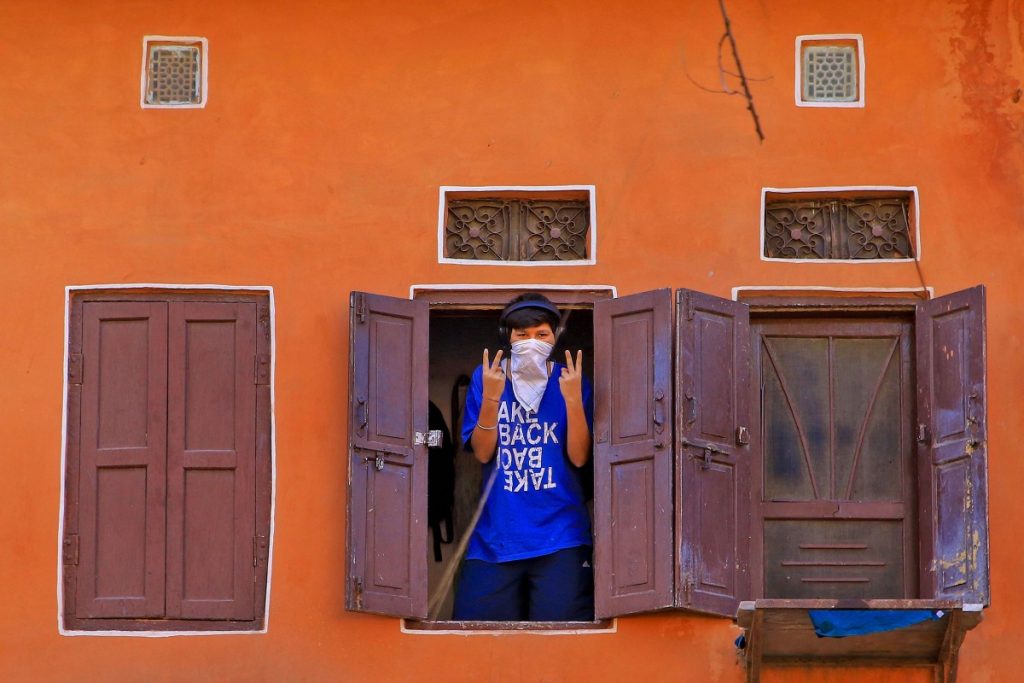 A boy looks out of his house in a COVID-19 containment zone in Jaipur. Photo: PTI

A Muslim family, single women find it extremely hard to find a place to rent across cities. Older, Brahmin dominated localities in Bangalore and Chennai have consistently refused to let out to ‘non-vegetarians’, who are more often than not, non-brahmins. These injunctions are well known and yet fail to cause a stir. What is curious is, that across classes we see housing as an individualised problem, dependent on negotiations struck with respective landlords.

But there is no better time to speak of the ethics and politics of housing than now. A crisis like this pandemic only reveals the necessity to create ethical, just cities.  While the working classes took to the road right after the lockdown, the blue-collar workers, facing job losses or salary cuts are trying to hold out as long as they can. The pandemic has brought the universal nature of precarity to the fore if nothing else.

Given how diversified the landscape of housing is,  there is a need to make housing a political question. But what can such political activism look like in India? In Delhi, a group called Students Tenants Union of Delhi (STUD) has been actively trying to build a collective to address excesses from the landlords. Several students now facing the threat of evictions post pandemic, STUD has been campaigning for cancelling rent for students. But for such unions to be effective, there is a need for similar unions which speak of the issues of tenants from other vantage points.

The unreasonable RWAs need to be held accountable to constitutional values. The landlords renting to working classes have to justify their arbitrary rent hikes and evictions. Civil society actors and left unions that may already be present in working class localities can amplify these numerous injustices that take place. Addressing the housing question would also need actors to acknowledge that this is a universal issue that cuts across classes.

The political discourse need not be a ‘good versus evil’ – good people versus evil landlord – discourse. The tenant strikes in the USA also show the severe pressure that many small-time landlords are under, owing to mortgages.

This has, in turn, fuelled a demand that challenges the financialisation model of American homeownership. Though housing in India is controlled very differently, it is worth opening up the conversations and demands to see the complexities of the housing problem in a society where the state seems suspiciously absent.

Could this lead to India’s Wall Street moment which gets together students, working classes, and blue collar workers together? Maybe or maybe not. But before we jump the gun, we need to begin speaking of housing rights as a first step to staking a claim on our city spaces.