he world was on the watch for the ruling from the UN top court, the International Court of Justice (ICJ), on the Rohingya genocide case. The Court, based at the Hague, made its historicand unanimous decision (17-0)on January 23, 2019, and ordered the Myanmar government to “take all measures” to protect its Rohingya people, who “remain at a risk of genocide.” The case titled The Gambia v Myanmarwas brought to the ICJ in November 2019 by the Republic of the Gambia on behalf of the Organisation of the Islamic Countries (OIC), and later fully supported by other states such as Canada and the Netherlands.

In its application to the ICJ, Gambia alleged that Myanmar has “committed and continues to commit genocidal acts against the members of the Rohingya groups,” who are a distinct ethnic, racial and religious group in Myanmar’s Rakhine state. The application further contained a request for the indication of “provisional measures” seeking to preserve, pending the Court’s final verdict, the rights of the Rohingya group in Myanmar and its members under the 1948 UN Convention on the Prevention and Punishment of the Crime of Genocide.

Public hearings on the provisional measures were held at the Hague from December 10-12, 2019. The Myanmar delegation, headed by the State Counsellor and de facto leader Aung San Suu Kyi, rejected the accusation of genocide, disputed the jurisdiction of the Court, and finally, urged the Court to reject the case. Aung San Suu Kyi further argued that what happened to Rohingyas in 2017 fell short of genocide, and that Myanmar should be left to deal with any human rights abuses through its own internal judicial systems. In view of the unique and rare case such as this, the ICJ, through the decision of provisional measures, first established its jurisdiction over the case, and held prima facie Myanmar accountable for its atrocities against the Rohingyas. 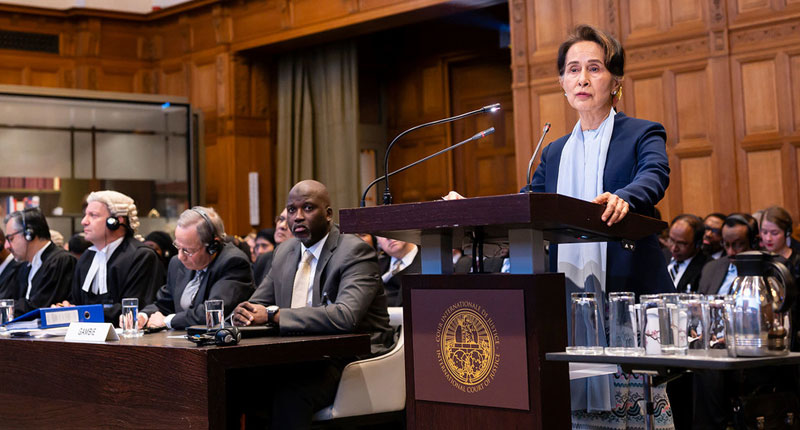 In 2017, more than 800,000 Rohingyas, men, women and children, were forced-following the armed Arakan Rohingya Salvation Army (ARSA) attacks on police stations-toflee the country across the border to Bangladesh.They joined 200,000 others from previous waves of violence in Myanmar in 1996. This clearance operation was spearheaded by the Myanmar military and security forces that reached a peak with unlawful killings, rapes, murders, and indiscriminate burning of Rohingya villages in the northern Rakhine state. An estimated 600,000 remained inside Myanmar, mostly in squalid camps supervised by the army and without any access to emergency healthcare or formal education. According to the UN court, the Rohingyas in Myanmar remain extremely vulnerable and needed protection from further bloodshed.