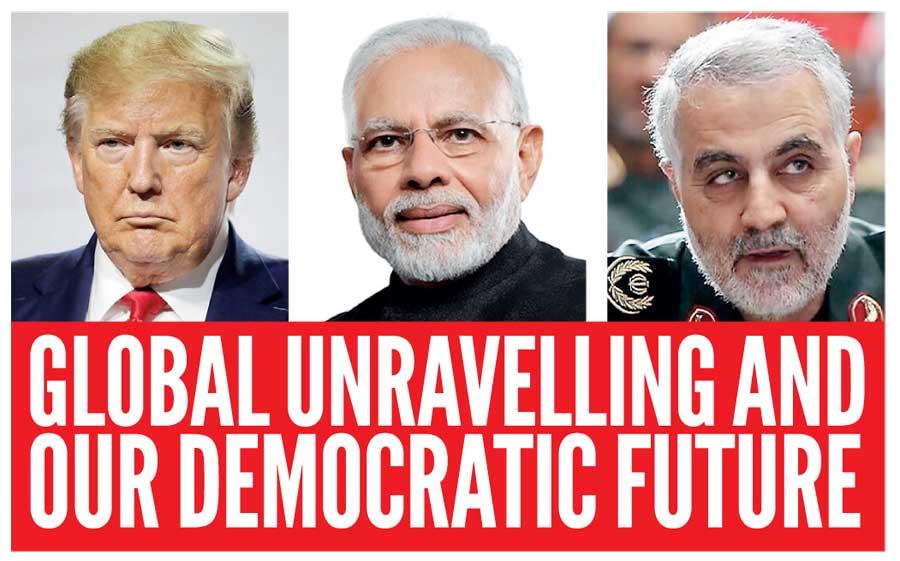 The new year and in fact a new decade have dawned under dark clouds in the region and the world more broadly. The concluding weeks of the last year have seen major protests in India against the worrying Citizenship Amendment Act, which has shaken the Muslim communities there in particular. The global situation has greatly deteriorated to the brink of war again in the Middle East with the assassination of Iranian General Qassem Suleimani by the United States on January 3. 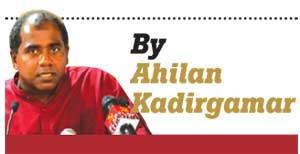 Even as President Gotabaya Rajapaksa made his majoritarian speech in parliament on his vision for security and development, the world was waking up to dangerous military escalation that could further aggravate a crisis- prone global economy. What does the current global political economic situation mean for a country like Sri Lanka? And what should be our approach as people to address the problems facing our country?

The problems of minorities and regions in India and for that matter the strife in Middle East did not just start in these few days and weeks. They are in many ways problems inherited from colonial rule and festered over the past decades. The questions of Kashmir in the Indian subcontinent and Palestine in the Middle East have remained unresolved and kept the regions at boiling point.
After decolonisation, imperialist interventions and proxy wars have polarised regions and undermined co-existence. Here, the Middle East with its rich oil resources and stretching geopolitically towards South Asia have been the focus of global hegemonic interests in the post-Second World War era. The tragic histories of Iran and Iraq, the crushing of leftist movements, the wars that have devastated their populations and their continuing turmoil have the interventionist stamp of the US and its allies. Here, repressive authoritarian regimes in that region have risen both supported by and in opposition to such imperialist adventures. While I focus here on Iran and Iraq, the proxy and civil wars extend to most parts of the region from Syria to Yemen. The momentary hope for democratisation in the Arab world close to a decade ago with the Arab Uprisings gave way to civil wars often backed by major powers.
The crises we see today in the Middle East have long lineages reaching back to colonial times, and solutions can only emerge through long political changes and negotiations; contrary to the imperialist calls and claims of “military solutions” and “regime changes”. And such political problems should be left to the peoples of those regions to resolve as the moves of global powers have only ravaged the region. However, imperialist powers rarely retreat of their own will. Furthermore, as with President Trump’s decision and aggressive statements about the assassination of Gen. Suleimani – considered to be one of the most powerful leaders in Iran and the region – raises concerns about how US partisan domestic political interests could also become muddled in
international conflicts.

The global economy is stagnating and by all accounts 2020 is going to see lower economic growth amidst a trade war between the US and China. While this global economic decline has a longer trajectory from the Global Economic Crisis of 2008 and shaped by the long capitalist economic downturn of the 1970s, an escalation of tensions in the Middle East will further aggravate the situation. The global price of oil has already jumped with the news of assassination and tensions in the Middle East, and the supply of oil and trade more generally through the Middle East are now likely to be affected.
The disastrous wars in Afghanistan and Iraq in the early 2000s devastated the economic situation in the Middle East and in no small measure contributed to the global economic crisis. With dangers of rising tensions and even another war in the Middle East, these developments are bound to have further global
economic fallout.
Iran has been pushed into a corner in recent years by the Trump regime, as the US unilaterally withdrew in 2008 from the nuclear deal reached with Iran few years earlier with the support of the major global powers. The US then and imposed severe sanctions squeezing Iran economically. The recent assassination of the Iranian General amounts to an act of war, and the US must take much of the responsibility for creating such
geopolitical instability.

It is into this gloomy world that we face parliamentary elections in a few months. Over the decades, we have seen how global developments shape our country. From the fall out of the 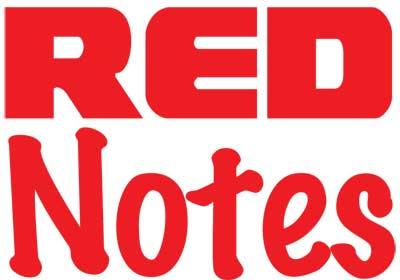 Global War on Terror to the rise of authoritarian populist regimes, Sri Lanka follows where global and regional powers lead. But these are inherently de-stabilising, if not devastating, political shifts and forms of rule.
The election of Trump and the re-election of Modi were foreboding of a change of regime in Sri Lanka, along with the rise of majoritarian forces and an authoritarian regime, but progressives in Sri Lanka did little to prepare the ground for safeguarding democratic space. If autonomy for Kashmir and the Muslim minorities come under attack in India, such majoritarian moves are likely to spread, however, in yet unpredictable forms into Sri Lanka.
President Gotabaya’s approach, form his recent speech in parliament, have focused on majoritarianism, security and development. Majoritarian policies inevitably lead to polarisation and resistance, but often in different ways from the past. In other words, it will not be armed Tamil politics in the future, as the Tamil community is too battered for such resistance. Whether the fallout of majoritarian policies will be political or economic is also unpredictable. Similarly, addressing social and political problems through security and repression, keeps social and political order on the
brink of collapse.
Sri Lanka is even more susceptible to global economic pressures. With declining global trade, it will be increasingly difficult to export and create foreign exchange earnings. And with many billion dollars of debt to be repaid or rolled over this year, borrowing from the global markets during times of instability are even more costly. And tensions in the Middle East will not only affect the oil bill, but could also affect much needed
foreign remittances.
I begin with this doom and gloom story of the beginning of this year and decade, not to depress us into inaction, but rather to learn from the world and prepare our own interventions. We must address our social and political problems through dialogue and negotiations. In the face of polarising centralised majoritarian moves, what we need is a democratic political approach that recognises the importance of devolving power to the regions, protecting the rights of minorities and rebuilding inter-ethnic relations. Furthermore, in a global order of economic development determined by tremendously concentrated financial power we have to focus on addressing class and other inequalities.
In a world where those who rule rarely reflect on the dangers of excessive power, the people should be vigilant. In times when the global order unravels and spills over destructive political and economic forces into our little country, we must preserve the space for approaches that are democratic. As we approach the upcoming parliamentary elections, we must act with these dangers in mind.