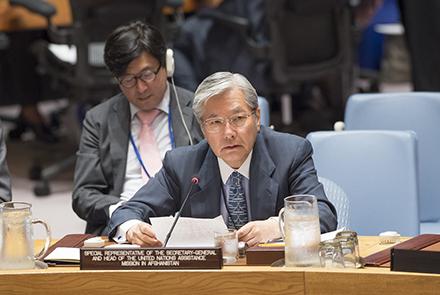 The UN Secretary-General’s Special Representative for Afghanistan, Tadamichi Yamamoto, on Tuesday briefed the United Nations Security Council on the situation in the country and said the direct talks between the Afghan government and the Taliban must begin as soon as possible.

He said the events of recent days and weeks have shown, more than ever, the urgency of finding a political settlement to the long Afghan conflict.

Efforts over the past year produced opportunities for peace, he said, adding that conflict can only be resolved by direct talks between Afghan people.

“These talks must be inclusive, representing the whole spectrum of Afghan society. It is imperative therefore that direct talks between the Islamic Republic of Afghanistan and the Taliban commence as soon as possible,” the UN envoy said.

He said he has listened to many Afghan people from across the country who expressed their hopes and fears about the future. “They hope for an end to the conflict, but they also fear that peace might come at the sacrifice of freedom and rights which the country has striven to protect and advance for the past 18 years,” Mr. Yamamoto said.

He said any political settlement must include a promise to continue to protect and advance human rights and fundamental freedoms for all who live in Afghanistan, including those of women, youth, and minorities, as well as the freedom of expression and the media.

He said the recent informal talks between representatives from Afghan society and the Taliban in Moscow and Doha gave opportunities for dialogue to address some key issues needed for peace.

“I hope that this experience will be carried forward and help deepen dialogue for constructive outcomes,” the UN envoy said.

He said the United Nations stands ready to support an intra-Afghan process, drawing on our impartiality and expertise.

“I also wish to point out that peace efforts need to address and bring about a reduction in violence and eventual ceasefire,” he added.

According to Mr. Yamamoto, the support of the countries in the region and beyond remains critical and their active engagement and support to peace efforts will be essential going forward, particularly from neighboring countries who have most to gain from peace and stability in Afghanistan.

Mr. Yamamoto said that on 28 September, the people of Afghanistan are scheduled to head to the polls in the fourth presidential election since 2001.

He said the United Nations supports fully the efforts of the Independent Election Commission, IEC, and Electoral Complaints Commission, ECC, security institutions, civil society, and above all, candidates, their supporters and voters to conduct credible and inclusive elections on schedule.

“Credible elections would provide an important political foundation for the future of the country as well as legitimacy and authority to the elected President, which would be particularly important in view of the expected peace process,” he said.

Mr. Yamamoto, however, concerns still remain ahead of the elections which include insecurity, voter turnout, and possible fraud and irregularities.

He said there are serious efforts underway by Afghan security institutions in collaboration with international partners to ensure adequate security arrangements during the preparations and for the polling day.

“Voter turnout is important for elections. 9.6 million people have registered. Voter turnout could be negatively affected by security, but also by the general interest of voters,” Mr. Yamamoto said. “Through our field offices, we have a sense that interest in the elections is not as high as it could be.”

He called on Afghans to exercise their right to vote.

He urged electoral bodies and candidates to call upon people to come out and vote.

“Candidates, political parties, civil society and the media all have the ability to field monitors to the process on election day, so I call on all stakeholders to obtain accreditation with the IEC in order to be present in every polling station,” Mr. Yamamoto said.

The UN envoy said efforts for peace should be accompanied by a reduction in violence; yet, violence has intensified in recent days.

Mr. Yamamoto said recent attacks by insurgents in Kunduz, Baghlan, and Farah, and above all multiple attacks in Kabul are of serious concern.

“The parties to the conflict must reduce violence and civilian casualties to demonstrate their seriousness for peace,” he said.

He said he expresses strong concerns over continued harm to civilians caused by Daesh, which is showing a sign of unabated and persistent intension to expand its influence.