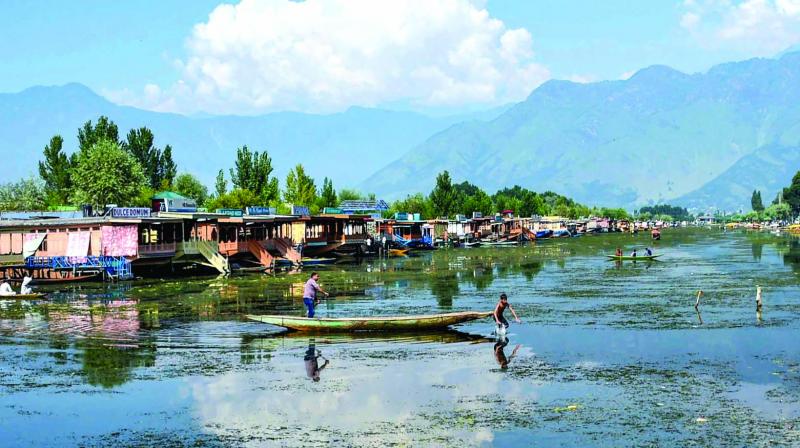 A boy jumps from a boat in the waters of Dal Lake, covered with weeds for being unattended for days due to restrictions, in Srinagar, Thursday.

New Delhi: A day after US President Donald Trump offered to mediate on the so called “explosive situation in Kashmir”, five United Nations Human Rights Rapporteurs issued a statement on the website of Office of the High Commissioner of Human Rights (OHCHR) asking India to end “crackdown on freedom of expression, access to information and peaceful protests” in “Indian-administered Kashmir”.

In a joint statement, they rapped India for using excessive force on the people of J&K in a bid to prevent dissent and protest ever since the Indian Parliament revoked the Article 370, removing special status for Jammu and Kashmir. The UN experts conveyed that such measures “would exacerbate tensions in the region”. They also expressed deep concerns over reports that security forces were conducting night raids on private homes leading to the arrests of young people.

While India is yet to react to the statement, such a criticism from OHCHR is not new. India believes that the oft-erupting criticism from OHCHR is part of a motivated campaign to show the country in poor light with regard to J&K and project an alarming situation there. In fact, last month Indian government had rejected a special report by OHCHR that flagged serious human rights violations in J&K and accused Indian security forces of excesses. The Indian government had said in July that the report of the OHCHR was “merely a continuation of the earlier false and motivated narrative on the situation” in Jammu and Kashmir. A statement on similar lines is expected from India soon on the latest statement by the OHCHR Experts.

Citing reports of communication blackout in J&K since the evening of August 4, a day before the Union home minister made announcement in Parliament with regard to scrapping of Article 370, the experts said: “The shutdown of the internet and telecommunication networks, without justification from the Government, are inconsistent with the fundamental norms of necessity and proportionality. The blackout is a form of collective punishment of the people of Jammu and Kashmir, without even a pretext of a precipitating offence.”

On the curfew imposed across J&K, the massive troop deployment and overall curbs, they said: “We remind the Indian authorities that the restrictions imposed by the Indian Government are intrinsically disproportionate, because they preclude considerations of the specific circumstances of each proposed assembly.”