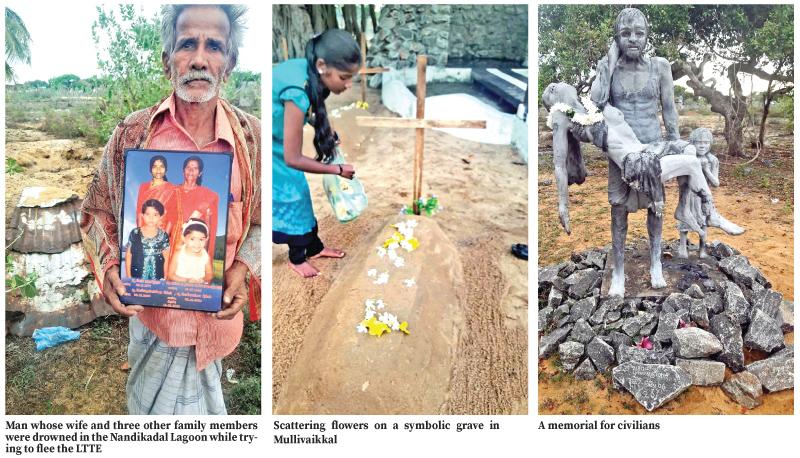 Travelling back to the final theatre of battle nine years later, where tens of thousands of civilians were trapped in the fighting, an activist reflects on the horrors of the final days of the war in 2009 and the inability of Sri Lankans in the north and south to connect to each other’s suffering on the anniversary of the guns falling silent.

Mullivaikkal, a narrow strip of beach in the Mullaitivu District is where the war ended, when the Sri Lanka Army militarily defeated the LTTE and its 26 year struggle for a separate Tamil state. Before 2009, Mullivaikkal was a beautiful, but practically unheard of village, between the now infamous Nandikadal Lagoon and the ocean on the island’s North Eastern coast.

The days, weeks and months preceding May 18, 2009, Mullivaikkal and nearby areas had been the epicenter of the final battles of the civil war, with a UN estimate of tens of thousands killed – combatants and civilians and hundreds disappeared – many of them after surrendering themselves to the authorities.

Yesterday’s emotional and moving journey to Mullivaikkal felt like a pilgrimage. It started when a good friend unexpectedly invited me to join him.

It became a journey that retraced his footsteps in 2008-2009, for twelve months, under very different circumstances. He had journeyed from Vellankulam on the North Western coast to Mullivaikkal with thousands of others, and was held for 100 days in the Vavuniya Menik Farm, the Government internment camp for civilians who had been trapped in the final battle zones.

As we travelled, he showed me the places he had camped out for several months and others in which he had only tarried a few days, in and out of bunkers, amid heavy shelling. He pointed to a playground on the roadside which he said had been inside the first No Fire Zone declared by the military. Here, he recalled people being killed and injured when shells rained down while a UN convoy was distributing food. At a nearby church, a mutual friend had lost his leg.

In that year long journey to Mullivaikkal in 2009, he had seen people fall dead all around him and many injured. We heard stories about how he had picked up an injured and dying man on the roadside, and carried him to a makeshift hospital in Puthumathalan on his motorbike while shells fell all around him. When he reached the hospital, his clothes were soaked with blood, leading medical staff there to think my friend had been fatally injured.

He pointed out a place and an incident where he had narrowly escaped being hit by shelling, but 13 other people had been killed.

My friend is a Catholic Priest. In 2009, his Bishop, the Vatican, even the Sri Lankan President had requested him and other Priests to leave the war zone, even agreeing to facilitate their exit. My friend was among the small stubborn and exceptionally courageous group of clergymen and women who refused to leave the war-zone until the last person had left.

Between April-May 2009, around the Mullivaikkal region, one of these priests died, another disappeared, one lost his leg and yet another suffered injuries. But my friend and others survived. He showed me the last place where he sought shelter until May 18 and the place the military interrogated him before his 100 days at Menik Farm.

As we walked around Mullivaikkal, he introduced me to other survivors.

One was an elderly gentleman whose wife and other relations including young children died on May 14, 2009. Keen to keep using Tamil civilians as human shields, the LTTE was preventing people from leaving the war zone, so this family had tried to secretly cross over through bushes and water. They had all drowned in the Nandikadal lagoon.

Another friend who had also stayed till the end, showed me a school in Mullivaikkal where bodies of the dead had been piled up. Another told a story of parents who survived, whose children had been killed. The children’s remains had been found when they returned to resettle after the war.

There were too many such stories to narrate, and there aren’t enough words to describe the pain.

Commemorations in the North

My friend also showed me where another Priest who had stayed with the people right till the end had died on the last day of the war, on May 18, 2009. That was Fr. Sarathjeevan, or “Fr. Sara”.

I had not known Fr. Sara, but out of respect for him, I had been attending a commemorative event for Fr. Sara and others killed, for several years, in a small village near Kilinochchi. Some friends of Fr. Sara had decided to erect a small and simple monument for him at the last church he served. From this church, right up to Mullivaikkal, Fr. Sara accompanied civilians who were being pushed back as the military advanced against the LTTE frontlines, pushing the Tigers’ frontlines, fell further and further to the edge of Mullaitivu. A second monument was also erected to commemorate all those who had died in the war.

The two monuments, standing side by side, are the first ever monuments built by civilians for civilians in the Wanni. During this year’s commemoration there, prayers had been offered for all those killed, including civilians, LTTE cadres and members of the armed forces.

Yesterday, I saw elaborate arrangements being made in the Mullivaikkal chapel for a commemorative service. Symbolic sand tombs had been made for those without graves, and they were sprinkled with flowers. There was also a bigger event with thousands of affected families participating, along with clergy, university students, the Northern Chief Minister and Tamil politicians.

North and South; Sinhalese and Tamils

Since 2009, May 18 is the day I feel the strongest disconnect between the North and East and rest of the country, along ethnic lines. Since 2009, the mood of May 18 in the North has been one of mourning. These events have been misunderstood by sections of the South, to be similar to the November LTTE Martyrs’ Day commemorations. But the May 18 memorials have not been about the LTTE.

Most Tamils in the North, which bore the brunt of the war, mourn and grieve for the family members killed. It is similar in the East, which also was badly affected by the war. For years since 2009, the rest of the country was a contrast. From 2009-2015, the Rajapaksa Government celebrated May 19 as Victory Day. The current Government decided that it will be renamed as Remembrance Day, a quieter memorial day for fallen members of the armed forces. There has been little attempt to transform May 19 into a day of remembrance of all those who fell in Sri Lanka’s long drawn war – civilians and combatants alike.

Over the years, in the North, those organizing and participating in remembering the war dead have faced restrictions, harassments, intimidations from police and military. At the end of the war, the Government at the time decided to raze cemeteries where LTTE combatants were buried. Some have had camps built over them, and military personnel play cricket on the same ground. For families of those buried on these grounds – because LTTE cadres were also someone’s family – this is agonizing.

Clearly, remembering those who were killed during the war – whether civilians, journalist, priest, politicians, soldier or LTTE – is something that divides us ethnically and geographically, even as we close upon a decade since the end of the war. There have also been voices and acts of extraordinary courage.

Returning after an emotional day in Mullivaikkal, nine years after the end of the war, I struggle to keep faith that the few exceptional voices and initiatives will prevail and Sri Lanka will overcome the May 18 disconnect. Reconciliation will remain elusive till then.