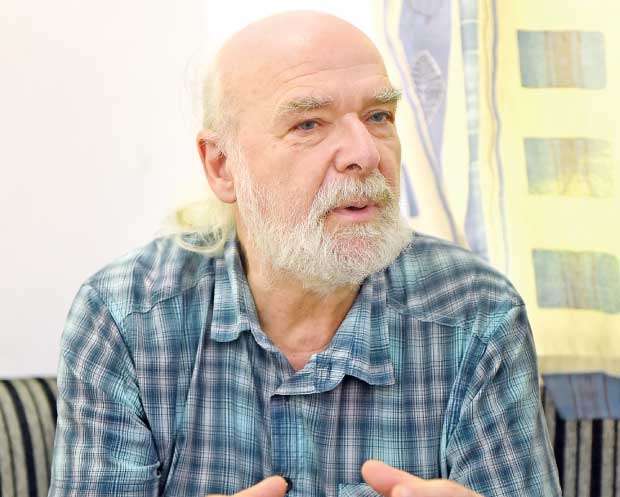 Dr. Éric Toussaint is the spokesperson of the Committee for the Abolition of Illegitimate Debts (CADTM International), formerly called the Committee for the Cancellation of Third World Debt. He is a historian and a political scientist who completed his Ph.D. at the University of Paris VIII and the University of Liège, Belgium. He has authored and co-authored many books such as Bankocracy, World debt figures 2015, ‘Debt, the IMF, and the World Bank: Sixty Questions, Sixty Answers’ etc.

During his recent visit to Sri Lanka to participate in the 7th CADTM South Asia regional workshop, Dr.Toussaint spoke to the Daily Mirror on Sri Lanka’s debt situation and the viable solutions available to free itself from the debt trap. According to him, not all debts should be repaid as illegitimate debts can be repudiated. He stressed on the importance of carrying out a debt audit to identify legitimate and illegitimate debts.

It’s not an intellectual exercise. It is about citizens exercising democracy to reach practical consequences. If a debt is identified as illegitimate, authorities should stop the repayment

Q: Sri Lanka built the Mattala Airport in Hambantota which is used by a few flights. But we must repay China around $23.8 million a year for the next few years. Your comments?
A: I would say this is typically an illegitimate debt.

Q What do you think of China’s Belt and Road Initiative?
I think China is a new imperialist country trying to get its own space and surpass the powers of the United States, Europe and other economic and military powers. China is aggressive with its lending policies and foreign direct investments. China is not imposing political conditionality, but at the economic level this capitalist country is looking after its own interests. In some loan and investment schemes, Chinese workers are brought to work in foreign countries. So the condition in which China is providing loans is not a positive alternative to loans provided by the USA, Europe or the World Bank. I am not saying it is worse, but this is not an alternative. It generates problems for the borrowing countries.

Q Do you see Sri Lanka as a victim of this initiative because Sri Lanka had to handover the Hambanthota Port to China on a 99-year lease?
Yes, accepting such conditions is a very dangerous concession.

Q Are these Chinese loans illegitimate?
I think we should audit the exact use of the money received. I am concerned and have reasonable doubt about the legitimacy of these loans. It’s increasing the level of dependency of the Sri Lankan economy. It develops an export model of development which does not improve the local economy. I don’t advocate autarchy. I advocate in favour of the integration of the people of the South Asian Region to connect, communicate and help each other as a region to satisfy the needs of the population.

I don’t advocate autarchy. I advocate in favour of the integration of the people of the South Asian Region to connect, communicate and help each other as a region to satisfy the needs of the population

Q How should a debt audit be carried out?
An audit should be done with the active participation of the citizens and should be carried out in a scientific manner. The exact level of the debt, the purpose for which the money received is used, conditions under which the loan was obtained- interest rate etc., the impact of the project on the humans and the environment and the legality of the contract should be analyzed. The audit should be used to identify the legitimate part and the illegitimate part of the debt. It’s not an intellectual exercise. It is about citizens exercising democracy to reach practical consequences. If a debt is identified as illegitimate, authorities should stop the repayment. If it’s clearly illegitimate, you should repudiate this debt.

Q Sri Lanka has fallen into a debt trap. Where do you think Sri Lanka went wrong?
The problem with debt is also about the level of Government revenues. If the Government decides to make gifts to the richer section of the society, for instance if the Government doesn’t ask the rich to pay taxes proportionally to their revenue or their patrimony, and if there is a lack of Government revenue it should be filled with public debt. The solution is to increase government revenue by respecting social justice. This is to say that the richer should pay more taxes and provide more revenue to the State, and the State should utilize the revenue in favour of the majority of the population- to improve the economic situation, to increase the number of qualified people in order to support the local industry, to support small-scale farmers and to improve the quality of public services.

Q You have advocated the cancellation or non-repayment of illegitimate debts. In your opinion regarding which projects should Sri Lanka cancel its debts?
In projects which are very costly and which don’t really benefit the majority of the population. We need to make an audit of the debt. But the general principle is that when you develop a mega project which costs a lot of money, and you don’t really see how the population would benefit from it, you can say that this is an illegitimate debt.

Q For instance, Sri Lanka built the Mattala Airport in Hambantota which is used by a few flights. But we must repay China around $23.8 million a year for the next few years. Your comments?
I would say this is typically an illegitimate debt.

Q Don’t you think the unilateral cancellation of debts would affect international relations between countries?
Yes, it would affect them. But I know of several cases where countries confronted creditors victoriously. I participated in the audit of the debt owed by the Ecuadorian Government in Latin America in 2007-2008. Ecuador succeeded in unilaterally suspending the payment of the debt.

Q You were the Scientific Coordinator of the Greek Truth Commission on Public Debt. What is the role of such a truth commission?
This commission was created at the beginning of 2015 to analyze the debt owed by Greece to the Troika. The Troika is a consortium of three entities- the International Monetary Fund(IMF), the European Central Bank (ECB)and the European Commission. I coordinated the scientific work of this commission under the President of the Greek Parliament. There were thirty experts analyzing the debt owed by Greece. Our work sessions were public. Greek citizens watched the sessions on television and thus knew what we were doing. We presented the findings of four months of investigations, and it was very clear that the Greek debt was illegitimate because the lenders gave loans to Greece so that it benefitted big private German, French, Belgium, and Dutch bankers.

Q Was the debt cancelled?
No! Because in the end, the Greek Government did not have the courage to confront the creditors. This cowardly behaviour of the Government provoked a great disillusion in the population.

Q In Argentina a suit was filed in court for illegal and odious indebtedness. Do you think this is a possible legal intervention even in Sri Lanka?
Yes, in each country we must support an audit process. In some cases, you can have a tribunal in the country to question the legality of the debt and also to ask those responsible for the illegitimate contract of debt to be brought before justice. We cannot accept that politicians increase the debt of the country against the interests of the population.

Q It is said that politicians receive commissions and kickbacks out of obtaining loans. How can we ensure that this does not happen?
If politicians know that the law in the country will penalize them if there is evidence regarding them receiving bribes,they would think twice. So we must struggle against the impunity of corrupt politicians.

Q By the end of 2016 the per capita debt in Sri Lanka was about €2100(Rs. 417 913) and now nearly all of the Government revenue is spent on debt servicing. What does this mean for the citizens of Sri Lanka?
It means that a huge amount of fiscal revenue, tax revenue of the Government is diverted to the repayment of debt. The consequence is that there is less money for public health, education and for the creation of jobs. For the majority of the citizens, perhaps, it is abstract because you don’t individually pay the debt of the Government. But in reality, they are paying individually, because a part of VAT is diverted to the repayment of this debt.

Q How is public debt and private debt connected?
Sri Lankans are increasingly using microcredit and are confronted with very aggressive policies of micro-credit agencies. We cannot accept the behaviour of micro-credit agencies who give loans to women, who don’t have earnings, who would be incapable of repaying the debt without making huge sacrifices. So these women are dispossessed of what they own and the lives of their families would be affected in the years to come. It is totally illegitimate to ask people to pay an interest rate of 26% or more. It is totally abusive. You cannot accept that.

When a Government is incapable of developing necessary infrastructure, citizens try to find alternative solutions. They go to the private creditors. Their necessities include fulfilling basic needs because they don’t receive the help of the Government that they should be receiving, as the Government is spending its revenue on servicing the debt. So there is a connection between public and private debt.
Pix by
Kithsiri De Mel