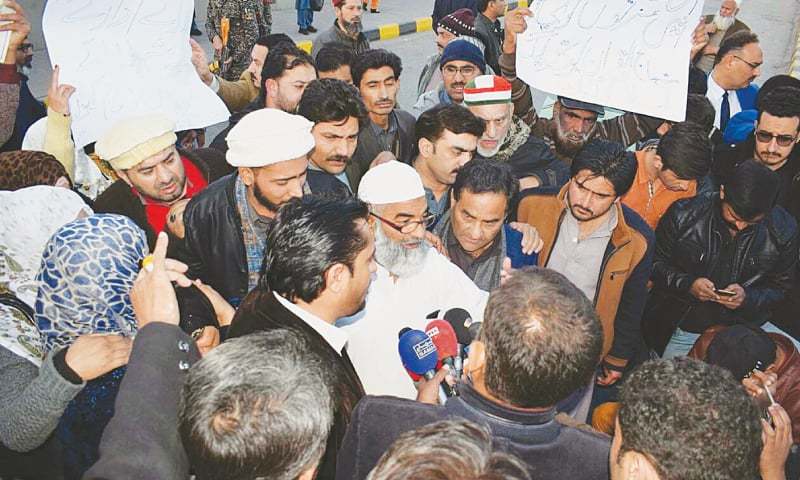 ISLAMABAD: The parents of Zainab, the seven-year-old whose gruesome murder has dominated headlines for the last couple of days, vowed not to lay her to rest until the perpetrators of the heinous crime were brought to justice.

Mohammad Amin and his wife, who were performing umrah when the unfortunate incident took place, arrived at Benazir Bhutto International Airport on Wednesday on a Saudi Airlines flight, and later flew to Lahore in the hope of securing justice.

Talking to journalists, Mr Amin said: “We will not bury her until we get justice.”

Claiming that police were not very helpful, he said: “The police came to us, asked some questions and drove away. This is no country for ordinary people, we are treated like insects.”

The brutal rape and murder of the innocent child caused uproar among political circles and civil society, with all parties and groups condemning the tragedy in the strongest possible terms.

The federal cabinet, which met on Wednesday with Prime Minister Shahid Khaqan Abbasi in the chair, also condemned the barbaric incident and ordered strict action against the perpetrators.

In his condemnation, Chief of the Army Staff Gen Qamar Javed Bajwa directed the army to assist the civil administration of Kasur in tracking down the serial killer.

Former prime minister Nawaz Sharif, whose party heads the Punjab government, also demanded immediate and exemplary punishment for the rapist. “An exemplary punishment must be given to those involved in the killing of an innocent girl so that no one can dare to commit such a heinous crime in the future,” he said.

Prime minister’s spokesman Musaddiq Malik admitted that it was a police failure that the serial killer had not been arrested, despite the incidents that had taken place in Kasur. He also lashed out at intelligence agencies for not probing such incidents.

Pakistan Peoples Party (PPP) chairperson Bilawal Bhutto-Zardari termed the incident “shocking and a slap on the face of Sharifdom, which continues to ignore such ghastly incidents”.

“Ten incidents of minors’ rape and murders had been reported in Kasur and eleven in Sheikhupura alone last year. It seems some parts of Punjab have been turned into hell for the children, especially the girls, but the Sharif brothers appear to have abandoned their duty as rulers,” Mr Bhutto-Zardari said in a statement.

In a tweet, Pakistan Tehreek-i-Insaf chairman Imran Khan said: “The condemnable and horrific rape of the minor had once again exposed how vulnerable children are. This is not the first time such horrific acts have happened.

“The total degeneration of the Punjab police was apparent once again today in Kasur when they opened fire on the unarmed protestors who were raising their voice against this horrific incident. The Sharifs have turned Punjab police into a killer police.”

The National Commission for Human Rights blamed the Kasur district administration for the murder and said that had the NCHR recommendations been implemented, the latest incident would not have occured.

“There were very solid and sound recommendations that had been forwarded, but it is very painful to see that no concrete steps have been taken by the district administration of Kasur to curb the recurrence of such grave incidents,” NCHR Chairman retired Justice Ali Nawaz Chowhan said.

The National Commission on the Status of Women expressed grave concern over the horrific incident, and its Chairperson Khawar Mumtaz asked the provincial government to act promptly to arrest the murderer.