The 19-year-old became a global symbol of the fight for girls’ education after being shot in Pakistan’s Swat valley in 2012 for opposing Taliban restrictions on female education. 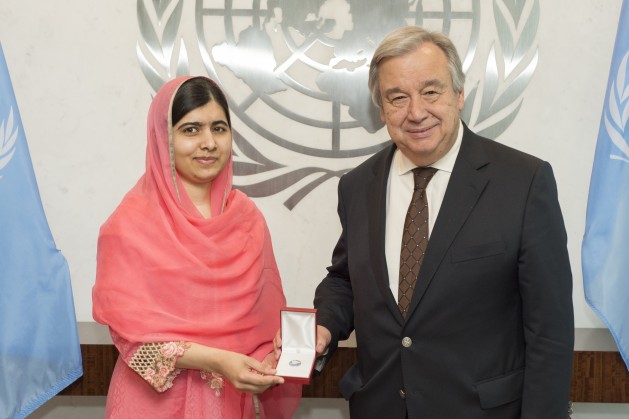 Pakistani education activist Malala Yousafzai has become the youngest UN Messenger of Peace with a special focus on girls’ education. During a designation ceremony, UN Secretary-General António Guterres selected and honoured Yousafzai as the organisation’s Messenger of Peace.

“You are the symbol of one of the most important causes of the world…and that is education for all,” said Guterres.

“Admiring your courageous defence of the rights of all people including women and girls to education and equality [and] honouring the fact that you have shown, even in the face of grave danger, the unwavering commitment to peace…it takes great pride and pleasure in proclaiming Malala Yousafzai a United Nations Messenger of Peace,” he continued.

Yousafzai, 19, became a symbol of the fight for girls’ education after being shot in Pakistan’s Swat valley in 2012 for opposing Taliban restrictions on female education. She has since become a global human rights leader, the youngest-ever Nobel Peace Prize laureate and has co-founded the Malala Fund to help the millions of girls who lack access to formal education.

“I stood here on this stage almost three-and-a-half years ago…and I told the world that education is a basic human right of every girl…I stand here again today and say the same thing: education is the right of every child and especially for girls, this right should not be neglected,” Yousafzai said upon accepting the role.

Over 130 million girls are out of school today. Girls often lack access to education because they have to work, care for younger siblings or are married early. Many also face violence, posing additional barriers for school attendance.

Beyond issues of education, Yousafzai has also been an outspoken advocate on issues of conflict and refugees.

On the escalation of violence in Syria, she stated: “To the children under siege in Aleppo, I pray that you will get out safely. I pray that you will grow up strong, go to school and see peace in your country some day. But prayers are not enough. We must act. The international community must do everything they can to end to this inhumane war.”

Most recently, Yousafzai condemned the US executive order banning people from several Muslim-majority countries, writing that she is “heartbroken” and asking President Donald Trump to not turn his back on families fleeing violence and war.

“I’m a Muslim and I’m proud to be a Muslim… I think people should look at me and all of the other 1.6 billion Muslims who are living in peace and believe in peace rather than looking at a few terrorists…they are not us,” she said during the designation ceremony.

Both Yousafzai and Guterres noted the challenges that refugee families face in camps.

“This shows how little the international community is doing to educate refugee children,” said Guterres.

“It is our responsibility, especially in the richest countries, to express our solidarity to all those who unfortunately cannot provide to their children the education they have the right to receive,” he continued.

The Malala Fund helps fund schools around the world, including education programmes in the Za’atari and Azraq refugee camps in Jordan.

Messengers of Peace are distinguished individuals, carefully selected from various fields by the secretary-general, to help raise awareness on the work of the UN. Others Messengers of Peace include US actor Leonardo Di Caprio, Brazilian writer Paulo Coelho and US singer Stevie Wonder.